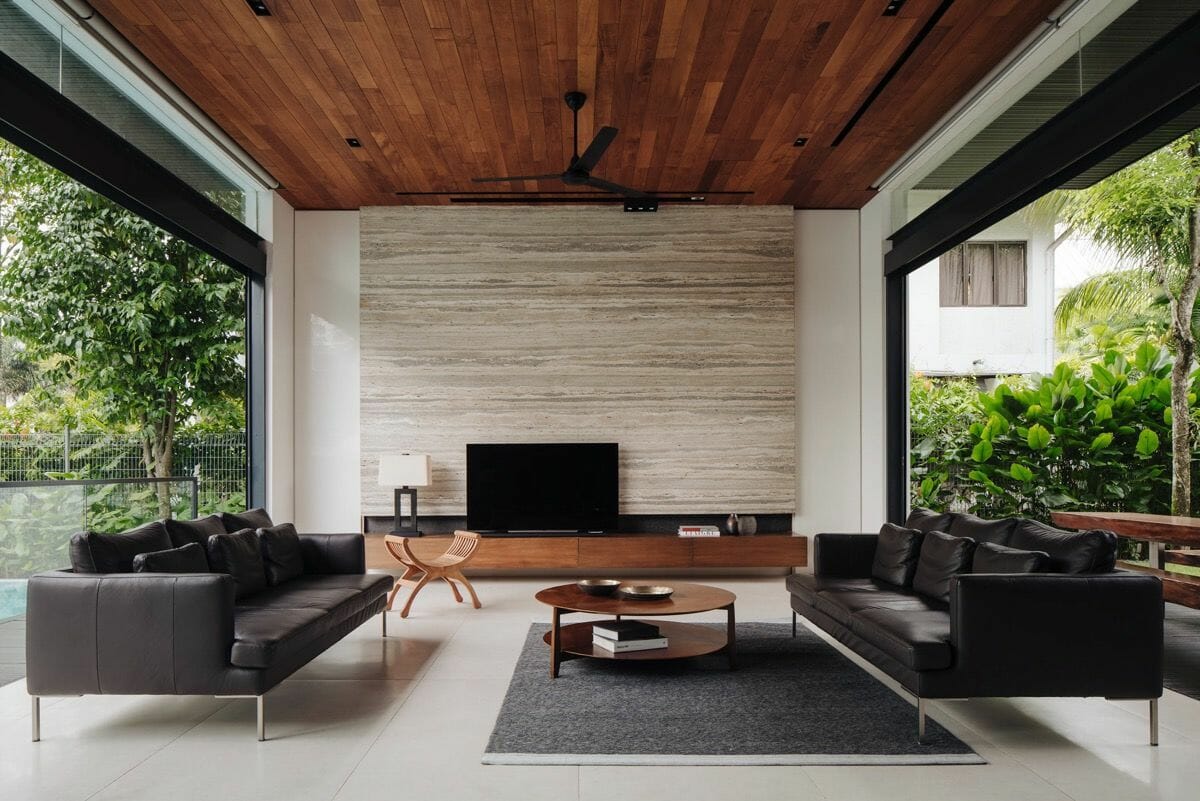 Industrial mid-century modern design is one unique style mix we just can’t get enough of! This combo style marries the best of both worlds, translating vintage and contemporary into a timeless masterpiece. And one recent client sought just this look for his new home. Read on to see how our designer accomplished the perfect blend of industrial meets mid-century modern!

It all started with a client acquiring a gorgeous mid-century-inspired house with an interior he wasn’t exactly in love with. Apart from feeling a bit dated, the layout also left a lot to desire in terms of functionality. When the owner approached Decorilla, he was looking for a designer to:

Not sure if industrial mid-century modern is the right look for you? Then, take our Free Interior Design Style Quiz to discover your unique decorating style today! 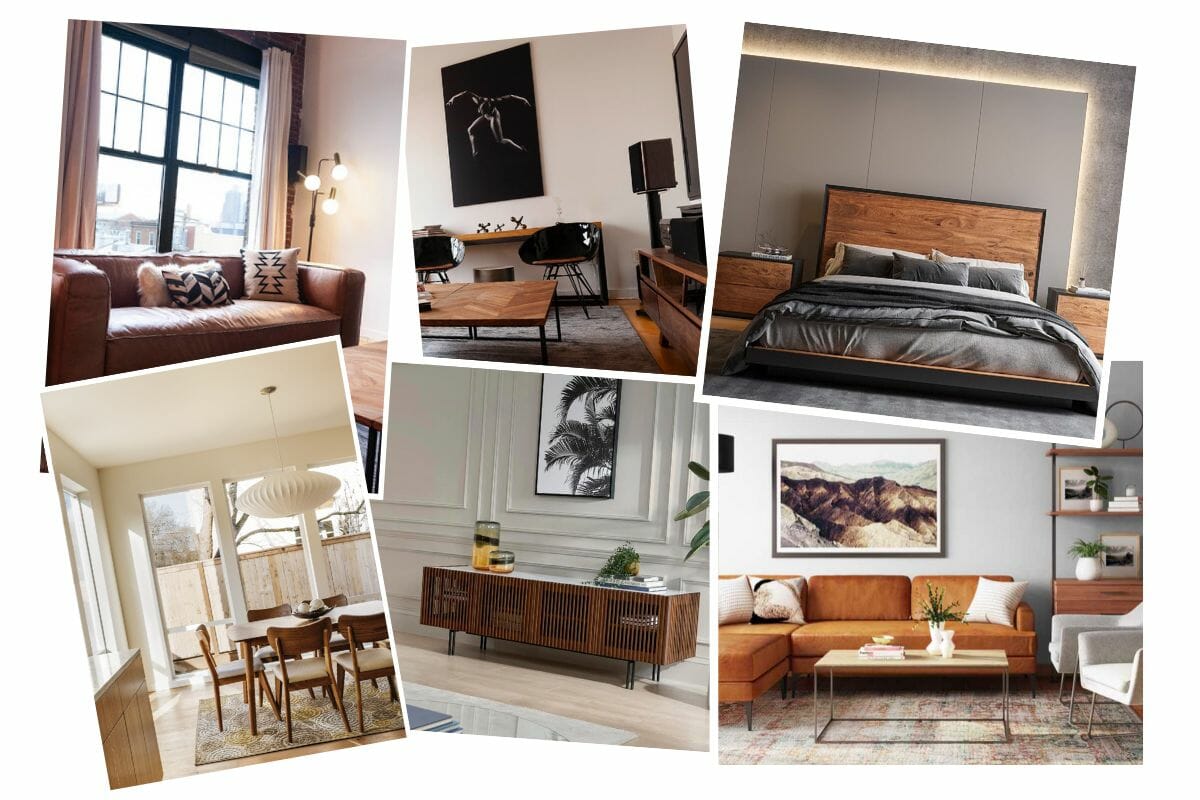 What the client was looking for turned out to be an interesting fusion of styles. He provided a comprehensive inspirational gallery the contained industrial decor mixed with other styles, such as neoclassicism, and a bit of mid-century modern design. Meanwhile, all the interiors pointed towards slightly moody and masculine displays of design without being over the top. 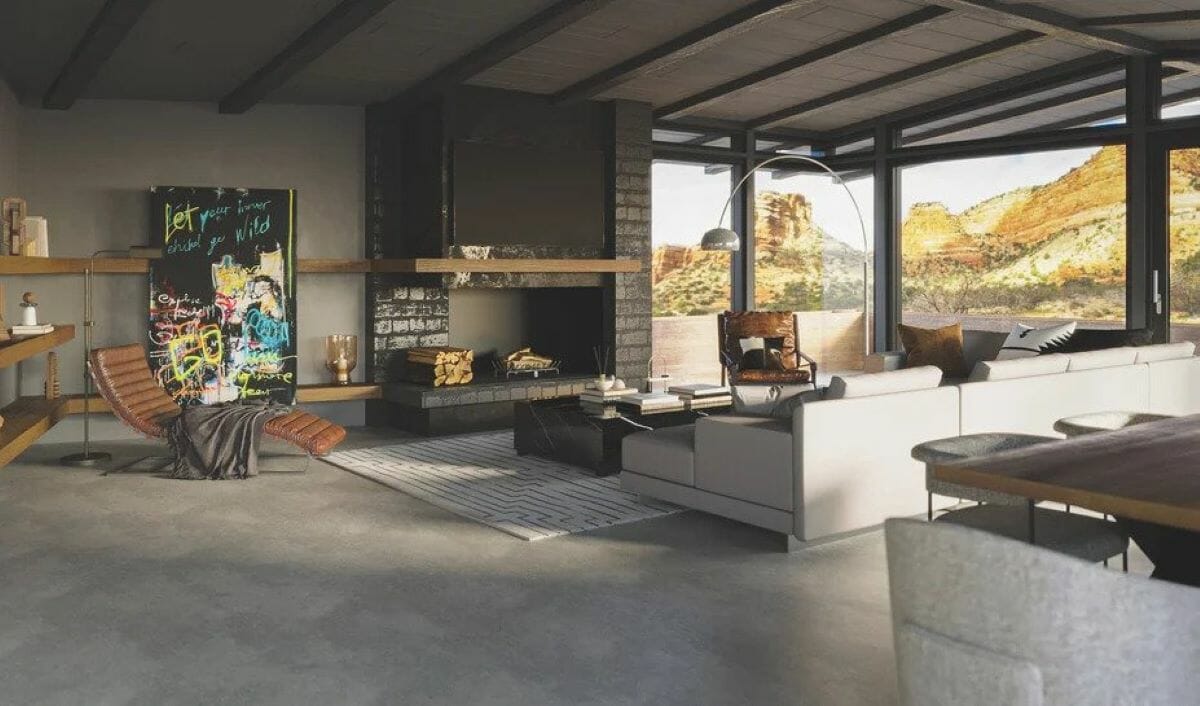 Because the client already had a pretty decent idea of what he wanted, finding him the most suitable designers consequently wasn’t much of a challenge. Shortly after completing the first steps of the online interior design process, he was connected with two creatives, both very proficient in the desired styles. Each designer presented an attractive industrial mid-century modern moodboard that started bringing the client’s vision to life. 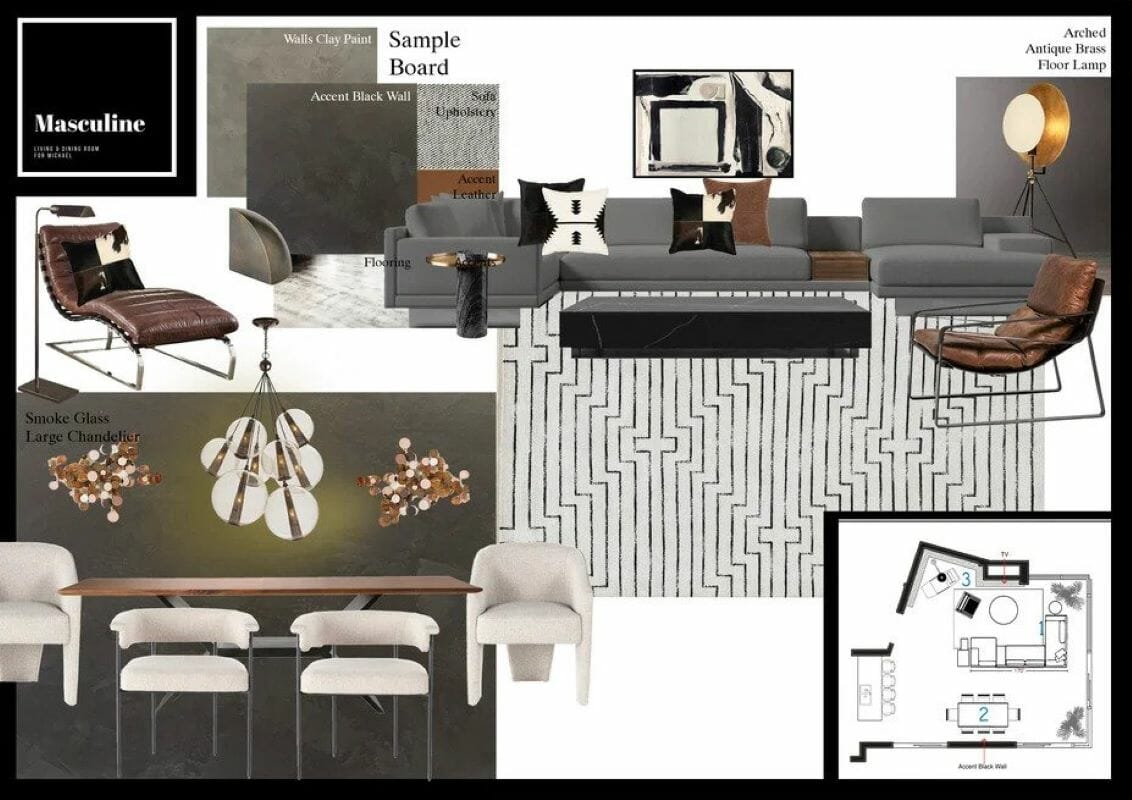 
While choosing between the two was not easy, the client finally picked the design proposed by Darya N. Her concept conveyed an inviting space that balanced raw industrial elements against homey furniture and decor. As a result, this allowed her to maintain and follow the spirit of the house and its owner while making it a proper residence at the same time.

Mid-century meeds industrial in an open living space by Decorilla

The designer loved what she described as “an incredible home with such well-proportioned rooms and an amazing view!” And the view was exactly what she wanted to put as the central point of the layout. The composition of the mid-century industrial design, therefore, works to bring the outside in, using the stunning canyon as a giant framed art. It also makes the perfect background to the loft-style dwelling the client was after. 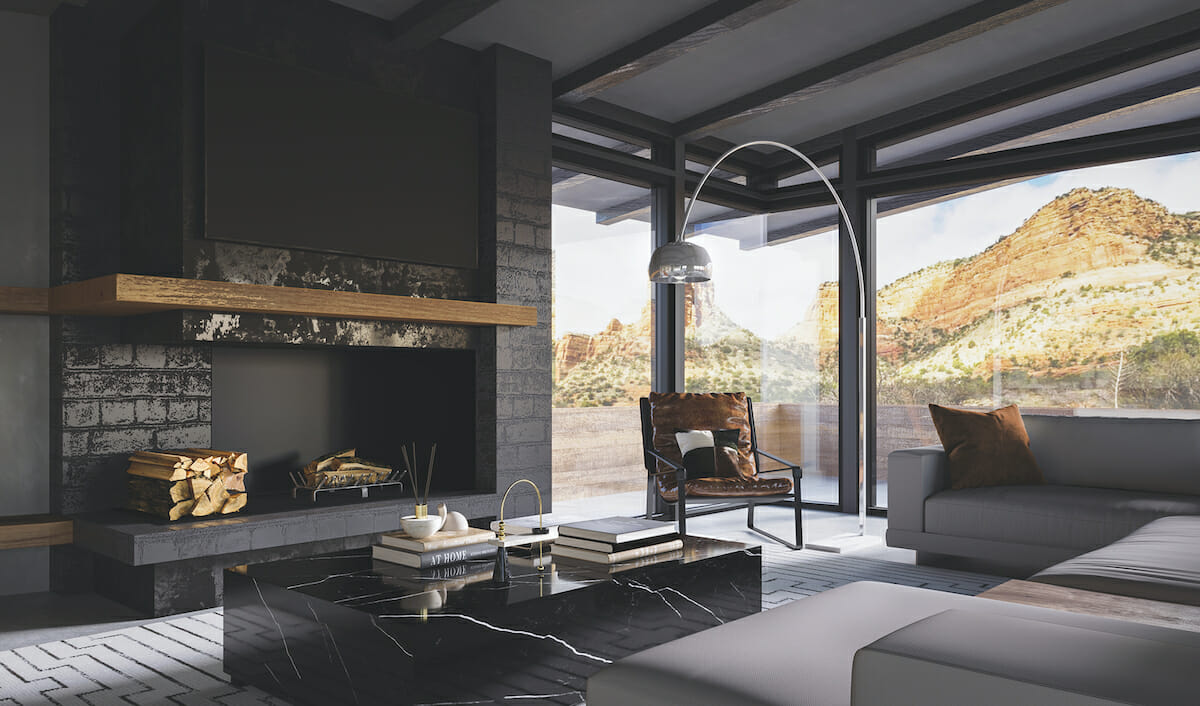 The living room is a stunning display of industrial meets mid-century modern. Darya’s interior design perfectly complements the  architectural features of the home rather than detracting from them. In such a large open space, a modular sofa and two streamlined leather accent chairs gather around the fireplace. A hefty marble coffee table atop a contemporary geometrical rug serve as grounding factors to the arrangement. The result is an intimate seating area full of visual interest and texture – a perfect place to host friends or just sit back and enjoy the view! 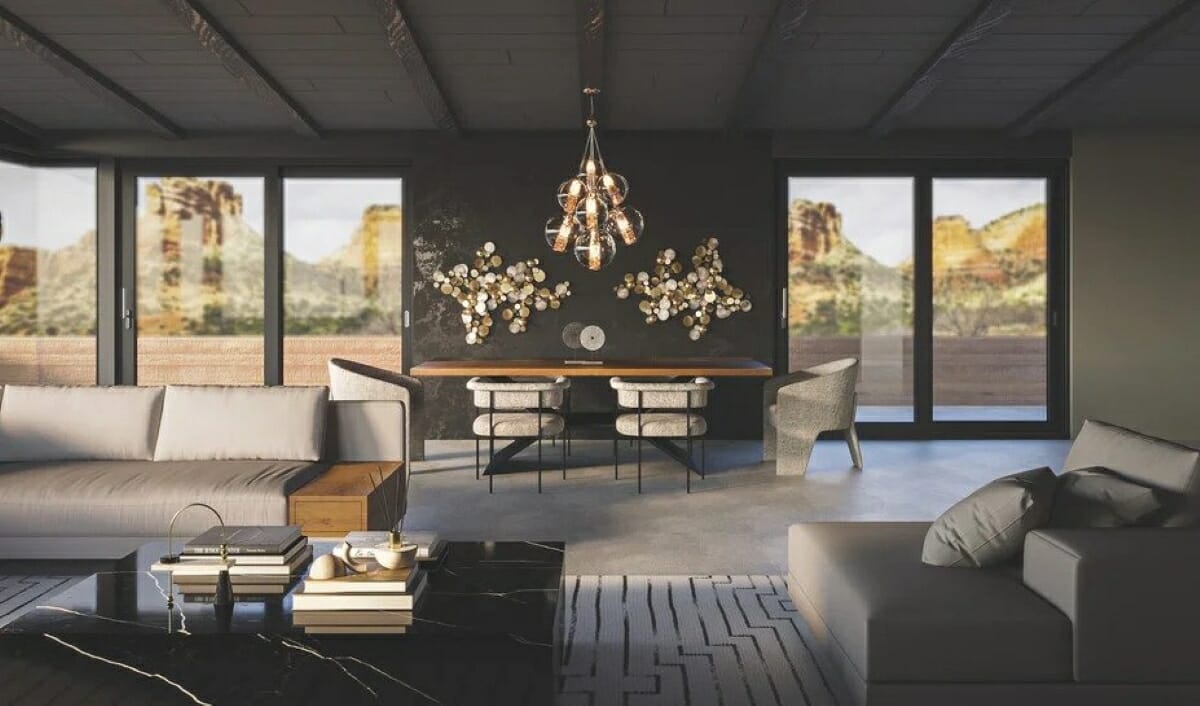 Darya also proposed adding dimension and color to the walls by painting them light grey with clay stain. In addition, a black accent wall and fireplace surround complement the iron support beams of the house. This dramatic color palette serves as the perfect canvas for the bright neutral fabrics while also allowing the antique brass accents to shine their best. At the same time, incorporating opulent materials such as leather and marble elevates the industrial mid-century modern space conveying a luxurious sensation. 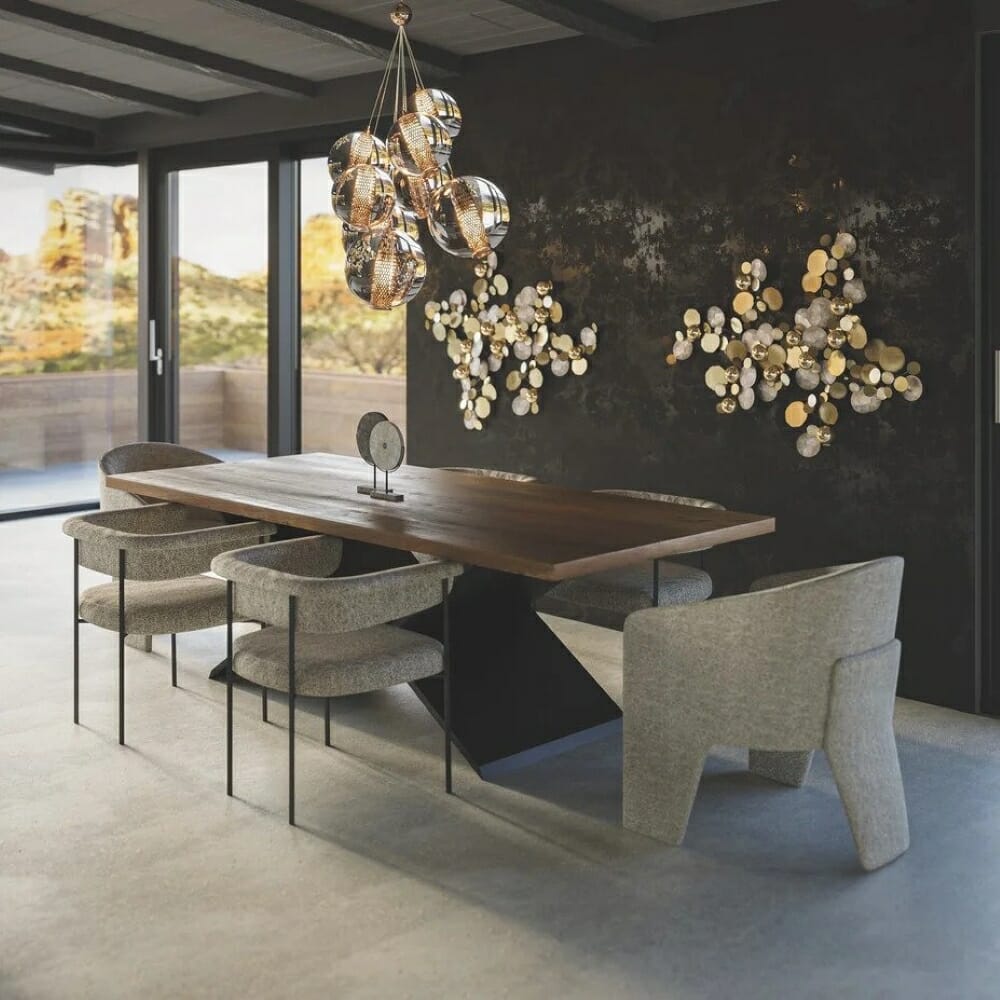 
The mid-century industrial design also carried over to the dining area creating a cohesive space with two distinct functions . A solid, raw wood dining table grounds the composition surrounded by two versions of upholstered dining chairs. However, the real stars of the space are the smoked glass chandelier and copper circular wall art. Both add just a touch of glamorous drama – sure to be conversation starters over dinner. 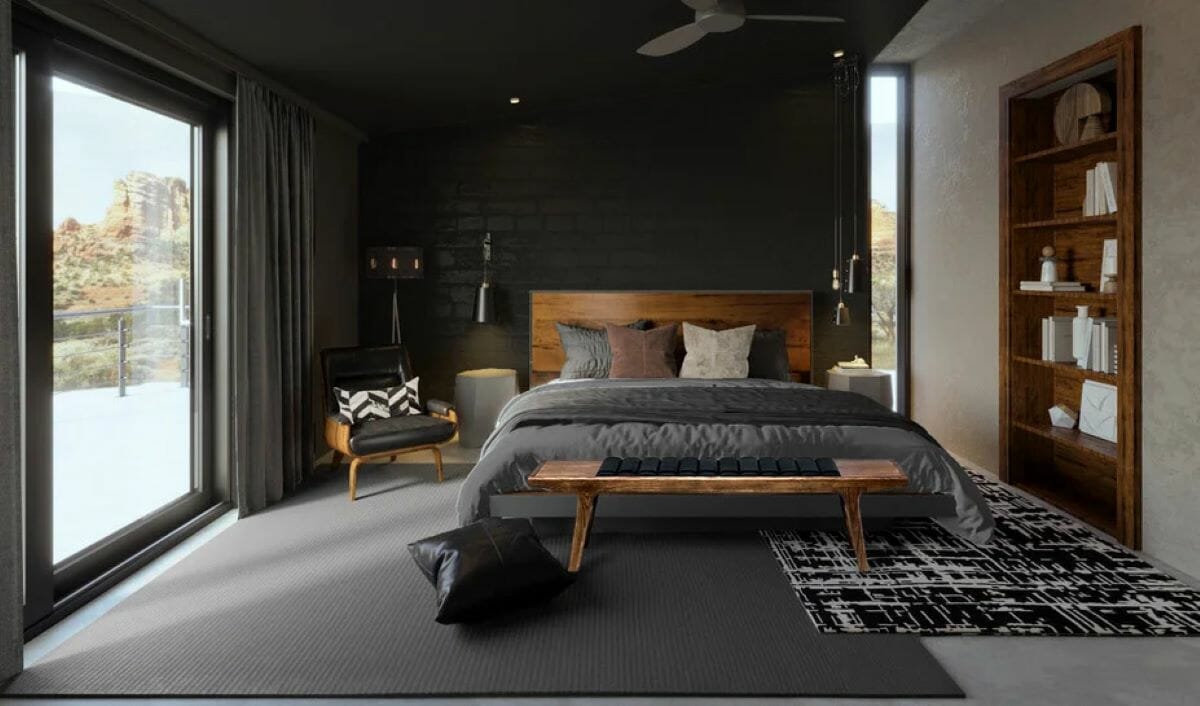 
The starting point for the mid-century industrial bedroom was a bed the client had an eye on. The designer was able to blend it with new pieces sourced to maintain cohesion throughout the house. The bed is framed by two cement night tables, with a matte metallic pendant light above each. Rich wooden texture and sleek metal finishes also stand out against the black brick background, creating a sensible balance. 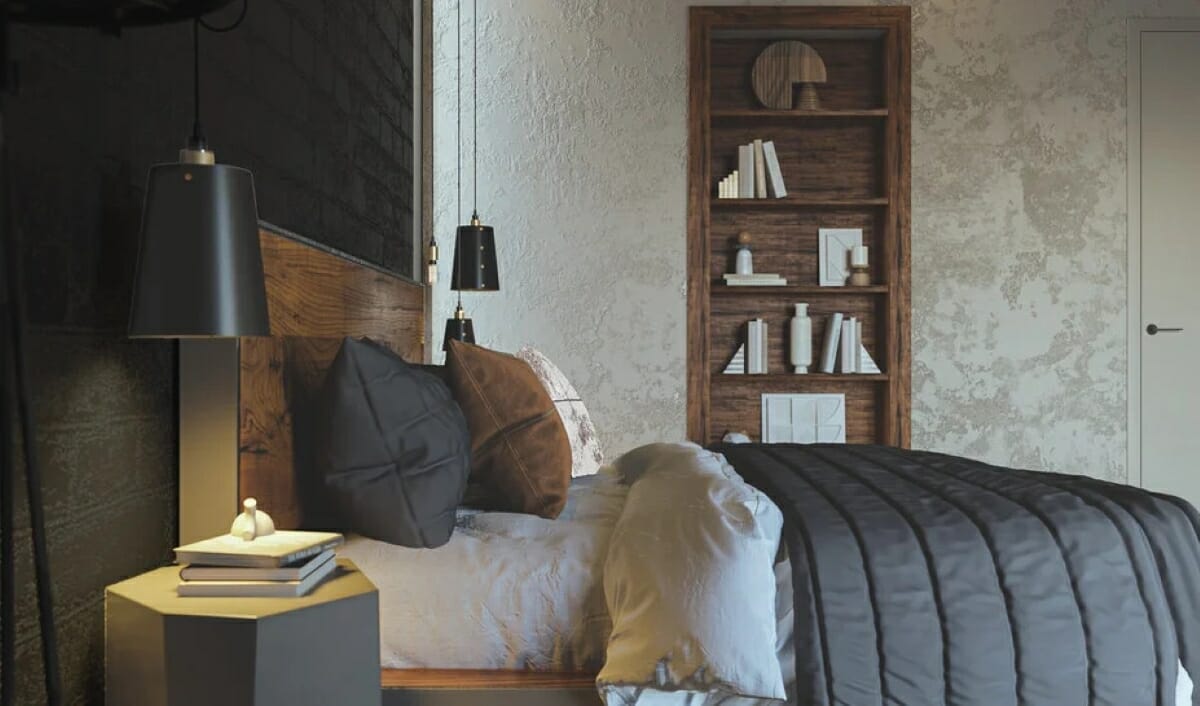 
Next to the bed arrangement, the wall niche hosts a wooden bookshelf, juxtaposing the rigid industrial vibes with its raw surface, warm hue, and mid-century-inspired display. Discreetly texturing the white wall brought yet another level of visual interest, preventing the feeling of heaviness from dominating the space. 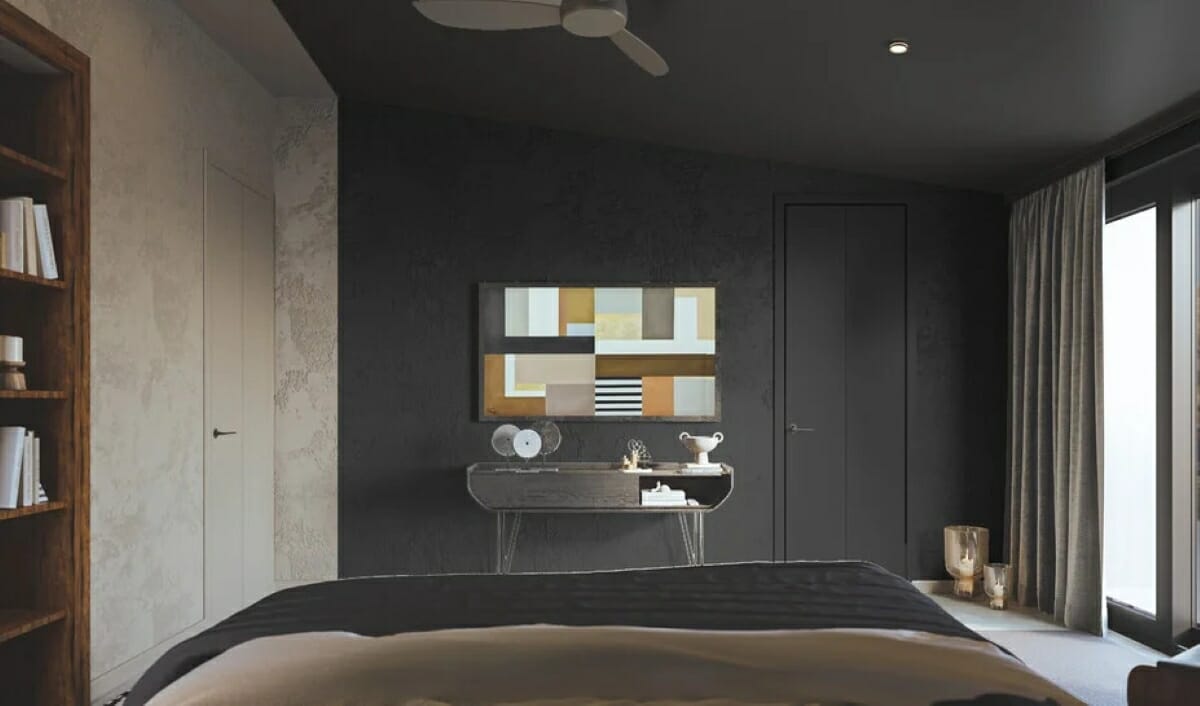 
Across from the bed stands the mid-century modern console accompanied by a prominent abstract geometric wall art piece. Although quite vibrant compared to the rest of the room, the painting’s earthy palette establishes the right balance between all the elements, cheering up the space while also pulling the room together. 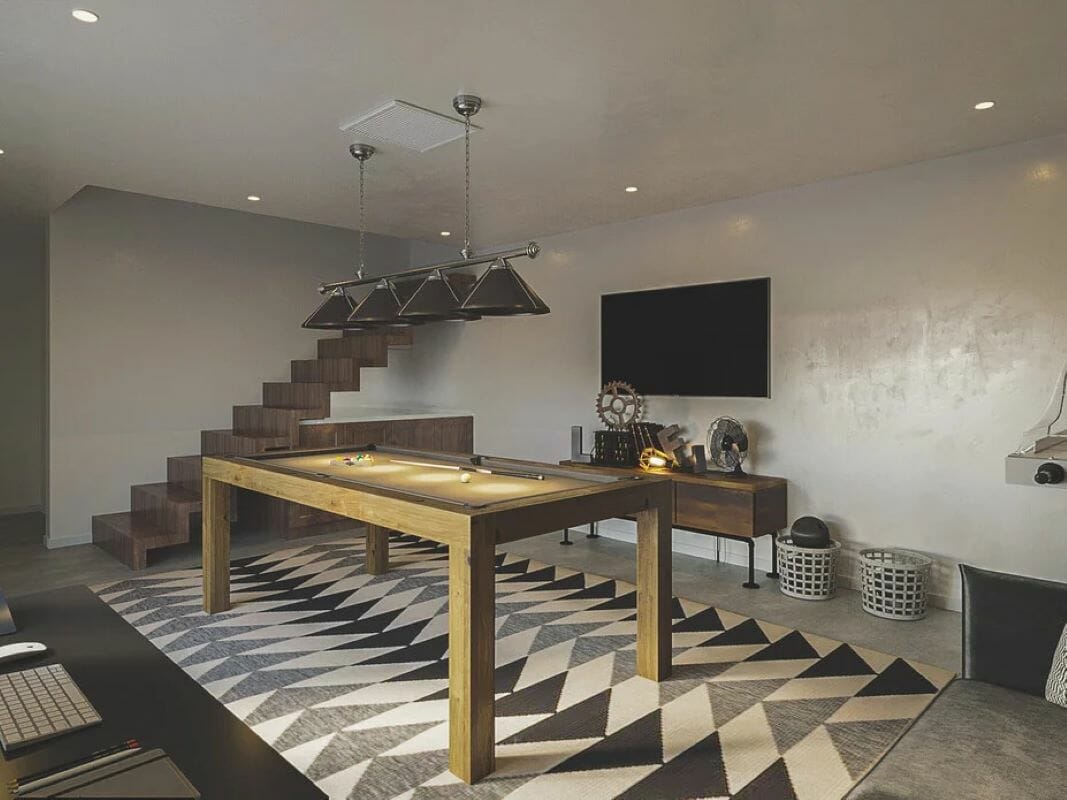 
Perhaps the most interesting space in the house, however, is the spare room turned flex room. This multifunctional space is a design hybrid of a man cave, home office, media center, and game room. Filled with mostly mid-century modern industrial furniture and putting function above all, its distinctive style still packs quite a punch. 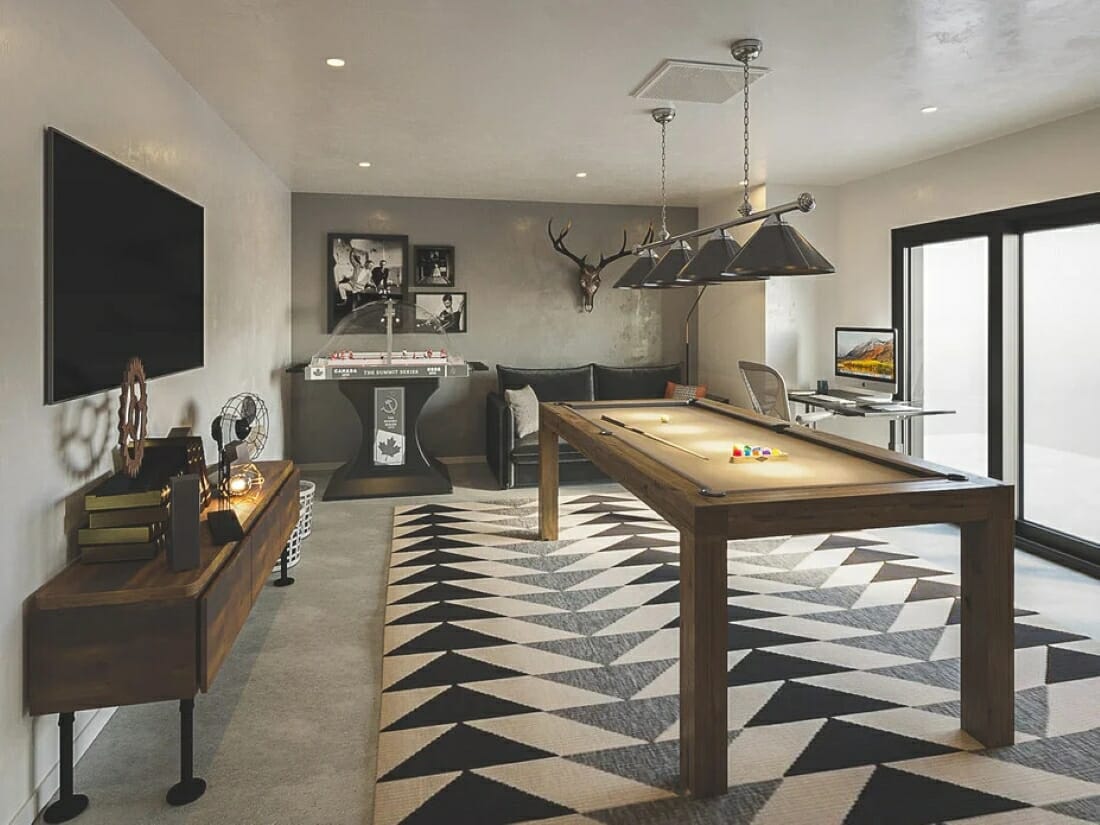 
While the primary color palette remains the same throughout the house, the mid-century flex room is slightly brighter than the rest. Instead of predominantly black and dark grey, here the shades lean more towards light smoke and off-white. Furthermore, the trap of monotony is avoided by the addition of natural wood, a geometric rug, a small framed photo gallery, and taxidermy. 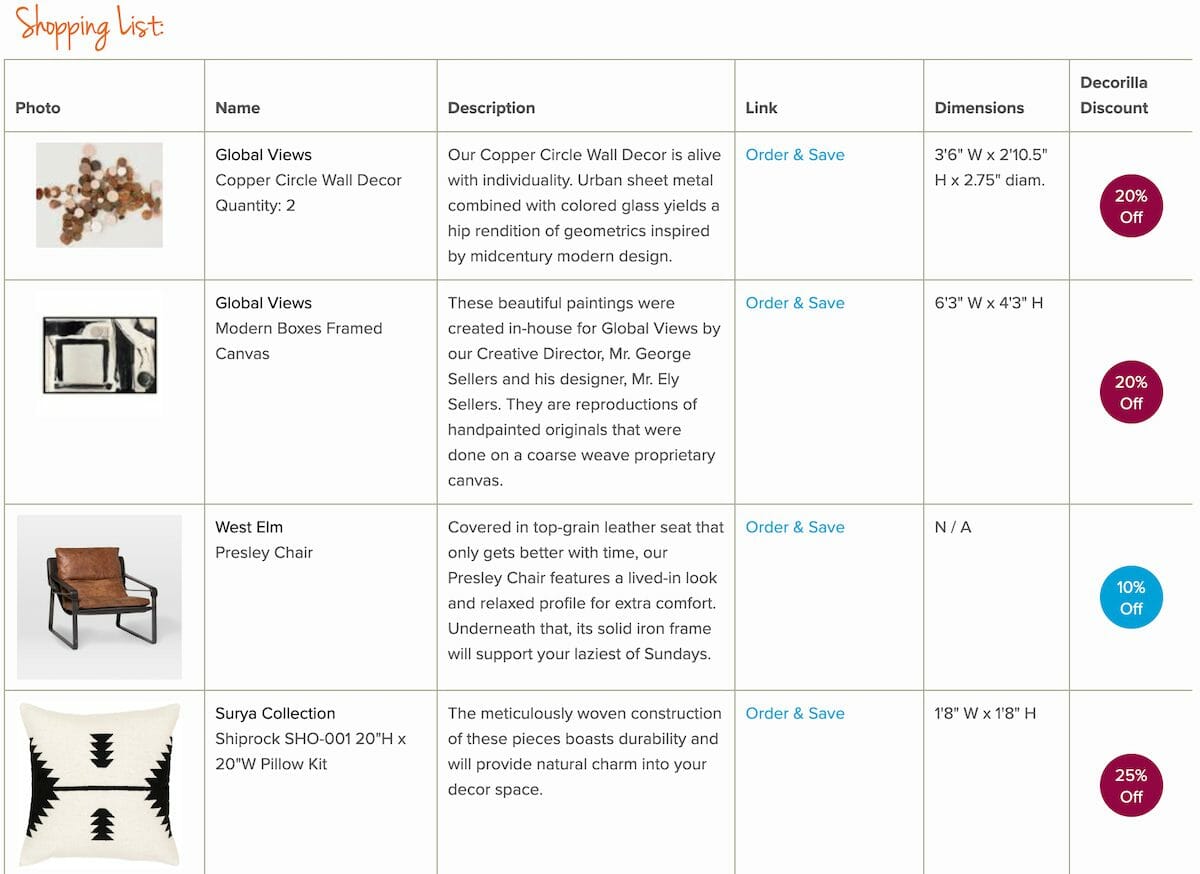 Each design package also includes additional benefits to streamline putting together your new interior. The client-favorite certainly has to be the curated shopping list with significant trade discounts. In addition, a white-glove shopping concierge handles all the ordering, tracking, and delivery of the items you choose to purchase from the list.

Mid-century industrial design offers an excellent opportunity to refresh your home with a stylish mix of vintage and new. So choose from our top picks to get started on your own space: 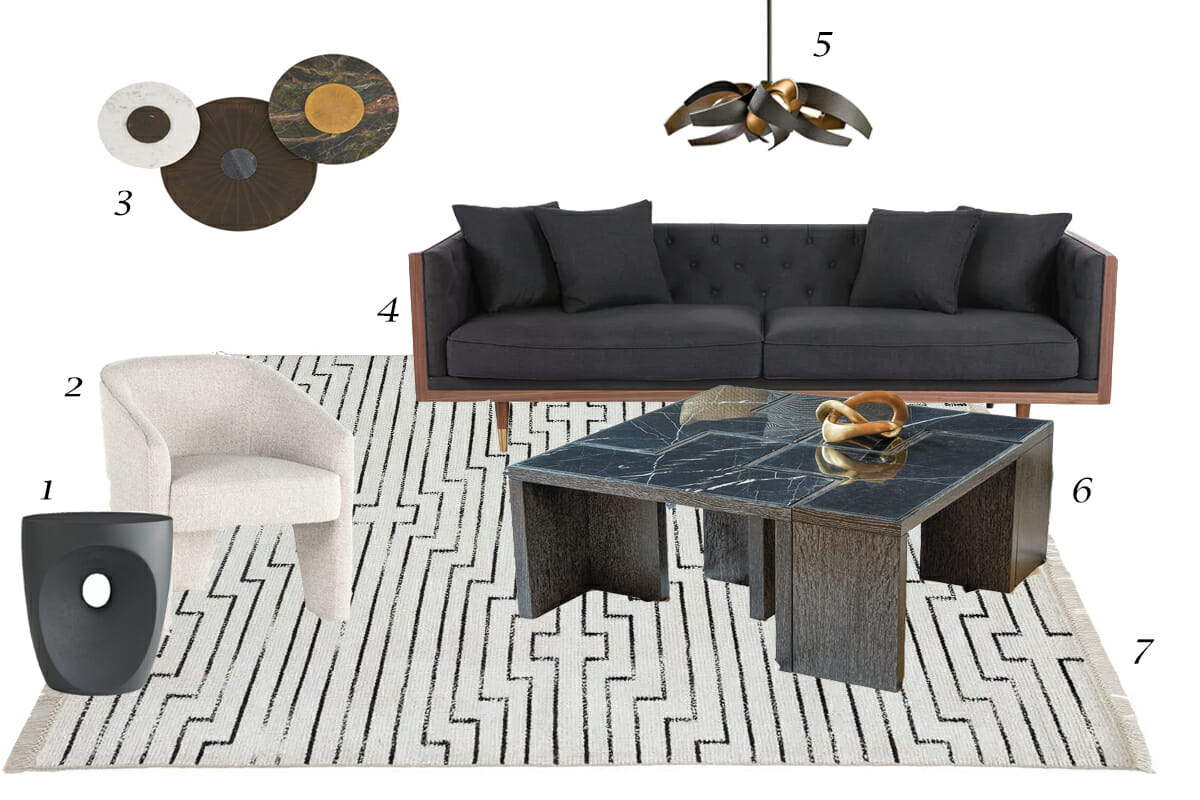 Your space can undergo a stunning transformation, too! So, schedule a Free Online Interior Design Consultation to get started on your dream home today!